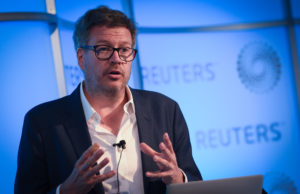 “Some of the same forces that have given rise to fake news and misinformation are also wonderful ways of keeping reporters and news organisations honest,” Robinson said in his keynote at newsrewired.

Before social and online media, readers irritated by any perceived factual inaccuracies in a story would send a letter and maybe have their corrections acknowledged; today, the audience can use Twitter and other platforms to publicly air their grievances, he explained.

“A willingness to admit mistakes is a significant driver of trust,” according to research on news media in nine countries by the Reuters Institute for the Study of Journalism. It adds, audiences today see a news organisation as both more human and more believable if they believe mistakes will be corrected quickly.

According to recent US research on behalf of the Reporters Committee for Freedom of the Press and Democracy Fund, both sides of the political spectrum agree news organisations need to own up to their mistakes. Of those surveyed, 70% of Democrats and 71% of Republicans said acknowledging mistakes and issuing corrections was the single most important thing the media could do to show its credibility as a news source.

If Reuters has to correct a story, Robinson explained, an advisory is published at the top of the article explaining the error and how it has been corrected. The news agency also often indicates where the original error appeared within the story.

“It’s a basic thing we can do as an organisation that keeps a level of trust between us and the readers,” he said, adding that Reuters’ backstory initiative has also helped increase transparency of how its reporters work.

The need to be first to a story encouraged by the increasing speed of the breaking news cycle can result in reporters making honest mistakes, but equal value should be placed on making corrections in the same environment to avoid feeding the fake news monster. Rexobol (Stanozolol) is a synthetic hormone similar to the natural hormone testosterone. Stanozolol is often prescribed to treat hereditary angioedema. This condition can cause facial swelling, as well as swelling of the hands and feet, bowel wall, and throat. The frequency and severity of symptoms can be reduced through use of Stanozolol. Here you can read more about rexobol. Common side effects you may experience sleeping difficulties, headaches, acne and changes in your libido. IUf any of these side effects worsen or become troublesome you should contact your doctor.

“We should never sacrifice accuracy for speed,” he added.