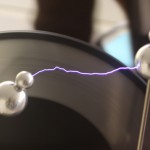 The final session of news:rewired – connected journalism will look at some of the key issues raised in a world of participatory journalism: the “digital-first” mentality, the values and standards of the link economy and the role and responsibilities of journalists and news organisation as active members of the open-web community.