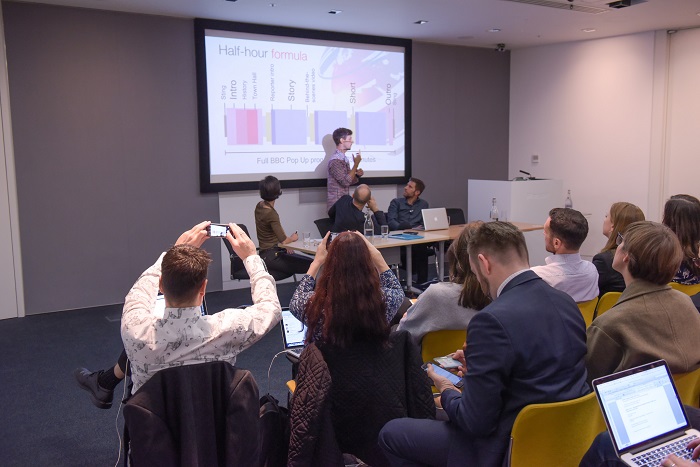 Sandra Gaudenzi, of IF Lab, the moderator of news:rewired’s panel on long-form video for the mobile generation, said industry specialists talked about documentaries as a dying form, but the reality was that journalists were now talking about the demand for long-form documentaries – and the genre is hip in a way that no one predicted only a few years ago.

Executive producer of Vice News,Yonni Usiskin, said the documentary’s comeback makes sense, even in the era of Snapchat, Vine and Periscope. As an innovative form that challenges mainstream media construction, it allows readers to access stories in more comprehensible ways.

When you have a news cycle that’s just about fitting a certain slot of time, you lose perspective on what the story really is. You wouldn’t see what actually happened. You wouldn’t see the beginning, the middle and the end. You’d just see the three minutes they pinned down to fit in a big news cycle.

Now, the BBC, Vice News, and The Economist are all investing in documentaries as an innovative form to engage with younger audiences. But how do they hook younger viewers who are used to consuming news in Tweets and Snaps?

Ask your audience what they want to see

For Matthew Danzico, founder of BBC Pop-Up, taking cues from the audience is a crucial component of deciding what stories to cover.

We’re engaging with audiences in a different way. I’ll tweet out where I am and ask people to come and talk to me and meet me.

Danzico describes BBC Pop-Up, which is the first mobile bureau for the organization, as a crowdsourcing unit and an experiment in workflow. Each month, its team of video journalists takes residence in a new world city and sources story ideas from the area’s locals.

We go into different cities and we take up residence, we have dinner parties, we make friends, we volunteer, and we hold town meetings where we ask, ‘what stories do you want us to do about your hometown?

Instead of reproducing already-popularized video clips, Usiskin said that creating engaging content means getting beyond ‘performative’ footage to reach the core of an issue. Vice’s documentary “The Road to Mosul,” for example, pushed journalists to film what was really happening on the ground in the Kurdish Peshmerga forces’ battle against ISIS, rather than what the troops wanted shown to a wider audience.

Behind-the-scenes can also mean using footage documenting the making of the documentary itself. Self-reflective video fills a designated slot in the BBC’s formula for making short content into long features. Brief and quirky, these segments allow viewers to relate to the people producing their content.

While platforms like YouTube and Snapchat don’t generate revenue, they do provide multiple ways into accessing content. Panellists said that sharing full-length feature video and its various components, like behind-the-scenes footage or serialized segments, can go a long way towards increasing audience engagement — and eventually generate revenue by pointing viewers to paid-for content produced by an organization.

All three panellists agreed that the popularity of documentaries relied on ditching the paternalistic model of top-down news presentation, which tended to alienate younger audiences.

… But keep your news values

Nicholas Minter-Green, president of Economist Films, said that when it comes to producing documentaries, generating the same high-quality news that’s produced in other forms is crucial for credibility, even if sometimes less than efficient. Often, months of research and editing go into producing The Economist Film’s 15-minute documentary shorts.

We’re putting the craft and effort in free-to-air social video that traditionally a BBC Discovery Channel 4 would put into their full half-hour full-length docs.

But Minter-Green says the time pays off in the end. When defining the new project, he says The Economist Films “stood by our reputation for being brutally independent and analytical and a very trusted media brand in a world where people struggle to understand what it is they’re actually getting from the media.”

Usiskin agreed that producing strong content was the most important key to success.

“Tell the story as it needs to be told. If it holds together, that’s the most important thing.”