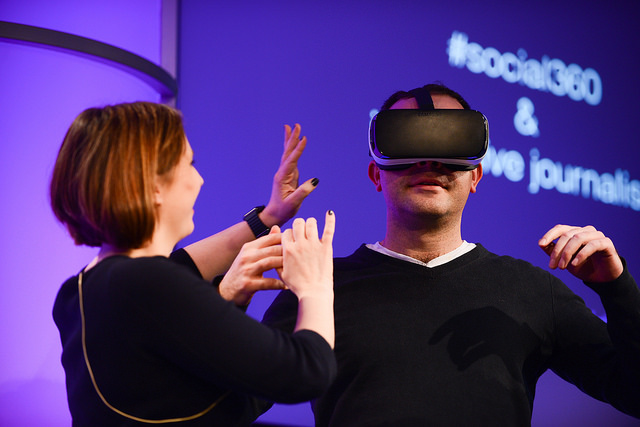 “2016 is the year of the 360-degree video and VR (virtual reality),” Parminder Bahra, executive producer, EMEA, of The Wall Street Journal opened his speech with at the news:rewired ‘video focus’ event in London today.

Virtual reality is already something that people can touch and feel with the rivalry between VR headsets coming to the forefront. Sony confirmed today the release of its Playstation VR in October, with Facebook’s long awaited Oculus Rift due later this month in the US, followed by the HTC Vive in April.

As technology develops and evolves, so too does the way we receive news. 360-degree video, a “fantastic tool for video-makers and story-tellers”, is being used by newsrooms more and more to allow the audience to fully immerse themselves within a story. The question on everyone’s minds this afternoon was: what place does it have in the newsroom and what value can it bring? 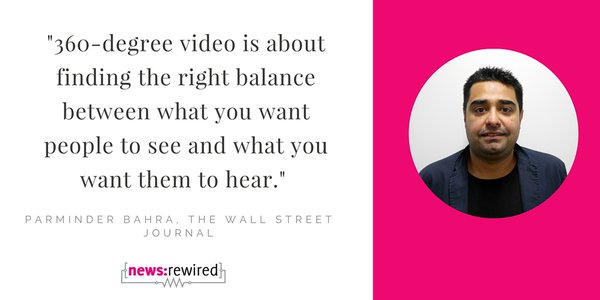 Bahra, Sarah Jones, founder of 360 Immersive Labs at Coventry University, and Ben Kreimer (via video-link), journalism technologist and beta fellow at BuzzFeed’s Open Lab for Journalism, Technology and the Arts analysed the benefits of using 360-degree video and also the issues that can come along with it. Jones said:

Kreimer, in agreement with Jones, revealed that if a story has a “strong spatial element to it there really is no other way but 360 video, but if it doesn’t I’d perhaps reconsider”.

Although Kreimer’s expertise lies in producing new tools for 360 video, he always asks:

Will this story really benefit from being told in 360 degree, or are we doing this just for the novelty effect?

If it isn’t going to add any value, we shouldn’t be using the technology.

However, there was a strong consensus that when the story was right the end result was an “incredibly strong and intimate experience”. But the key to a successful 360 video is “finding a balance about what you want people to see and what you want them to hear”, Bahra said as he showcased a number of videos that illustrated this.

How can you show this visual information and at the same time provide a narrative while listening to the story? It is very difficult to get people to actually listen to what’s going on.

As the 360 video is a “different creature to a traditional video”, there are “issues about how you publish. Where do you promote the videos? Where should you put it where someone is in the best position to get the full experience?” he continued. These are all questions that need to be considered and are still yet to be answered.

But the future looks bright for 360-degree video as Jones revealed statistics that show 74 per cent of 18-24 year-olds, its target audience, found 360 video added value to the story and changed their understanding of that story because they were free to navigate in a way they wanted to – in a way that traditional linear narrative restricted them to do so. While, 84 per cent of first-time viewers said that they would watch it again. Jones added:

360-degree video is a way of disconnecting a disengaged audience, an audience that always switches off from the news. They turn to Twitter and Facebook for their news but they were happily wanting to watch 360 content.

Slides and audio – The bigger picture: Putting news into context