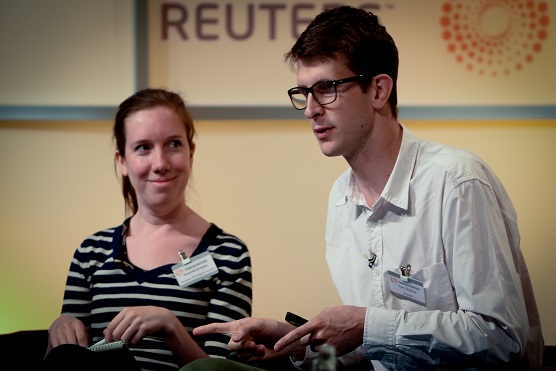 From the outside local and national news outlets seem like very different organisations – but aren’t their challenges growing ever similar? If so, then what can they do to improve levels of public trust, connect with real people, and improve the quality of the work they produce?

During a session of at the newsrewired conference, in London today, journalists from Le Monde, The Bureau Local, Archant, and Hackney Citizen discussed what larger media organisations could learn from local media outlets as they seek to connect better with audiences. They also talked through how local media outlets could improve the quality of their reporting in the face of constant cuts.

Reporters on the ground

The key advice for from the panel was for reporters to leave their newsroom and talk to the people on the ground. This is not just a way to build the trust of the audience, but also to find new stories that otherwise would remain uncovered. In a time when public trust in journalism is at the lowest, reversing this trend is crucial.

“One time we went to a tiny tiny village in the French Pyrenees, on a day when the trains were on strike: people were amazed at seeing journalists from Le Monde there,” said Aline Leclerc, a reporter with Le Monde told delegates.

Leclerc said she had recently worked on an initiative called “francaises, francais” (French women, French men). Alongside the traditional coverage of the presidential electoral campaign, Le Monde offered stories of everyday life through this initiative. Ten reporters visited more than 50 cities across the country where they would stay for four or fives days to talk with local people.

Being trusted within a community is also important for journalists as they seek to uncover exclusive stories.

“Being a journalist in this country [usually means working] in a London office,” said Tom Bristow, investigations editor at Archant, regional media organisation with over 100 local magazines and newspapers. “I go to different towns, when you meet people face-to-face you can do much more. You start asking, and then you find a story.”

The panel moved on to talk about partnerships. When local organisations are struggling to survive, conducting investigations is often not a priority, while national organisation have the resources but often not the insight into the communities.

“Many stories on a national level are not being told, said Maeve McClenaghan, investigative journalist at The Bureau of Investigative Journalism, “so we thought about cooperating with local newsrooms.”

McClenaghan explained how earlier this year the Bureau of Investigative Journalism launched its Bureau Local team with the aim of developing a collaborative network of people interested in pursuing local accountability reporting through data and investigative techniques.

In a few months, the Bureau Local has built a network of 360 members in 84 cities and produced four main investigations for a total of 77 stories. Building partnerships across newsrooms in the country, with the help of tech experts and local reporters, means putting together energy and resources to produce innovative and ambitious investigations – with potential for national and local significance – that could not otherwise be done due to time, resources, and technology.

If stories on a local level can be put together for nationwide stories, stories on national level can be made relevant for local readers, delegates were told. Roletai ir žaliuzės diena naktis gera kaina Roleta

“When you are editor and owner, you have autonomy. You can move your reporters to do something else,” said Keith Magnum, founding editor of the Hackney Citizen. The newspaper is now focusing on safety for social housing residents in the neighbourhood, after the Grenfell tower fire, offering a local angle of a national story.

“There is a huge national data set from all sort of organisations, such as the NHS or government bodies, and are broken down to a local level”, said Tom Bristow, “but not many people actually go and look what their local data say.” Stories are there to be found, but for journalists not familiar with data journalism can be intimidated by this.

As it happened: Social media beyond the Facebook newsfeed