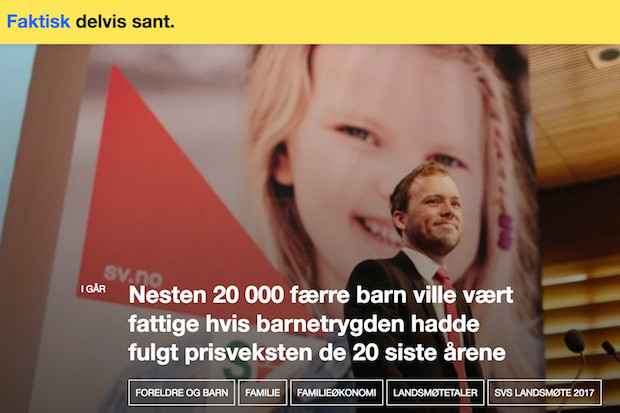 In December 2016, a small team of journalists, developers and designers from the two organisations started working on the project, called Faktisk. Two more organisations came on board this spring – NRK, Norway’s public broadcaster, and TV 2, the largest commercial television broadcaster in the country.

Faktisk, which launched officially in July, has been set up as an editorially independent, non-profit organisation that fact-checks claims made in public debates and on social media. Its team of eight, led by editor-in-chief Kristoffer Egeberg, come from its four founding media companies, although anyone can apply to join.

Fact-checks are published on Faktisk’s website, as well as through Facebook, Twitter and the Norwegian national news agency NTB, which enables newspapers to re-use them by embedding them on their own websites.

“It’s important to not underestimate fake news but at the same time we also need to focus on what builds trust, and fact-checking is the kind of journalism that builds trust,” Helje Solberg, chairman of Faktisk’s board, and editor of VGTV, told Journalism.co.uk.

“Faktisk is run as an open-source software that allows unlimited access for reuse and distribution of its structure and its content.”

On the Faktisk website, verified claims can be filtered by label, such as ‘partially true’ or ‘completely wrong’, by theme, or by the individual who has made a statement. Each article includes elements such as the context in which an assertion was made, the evidence and data that led to the conclusion, and a reaction to the debunk from the public figure who has made the claim.

A recent fact-check, which three Faktisk staff members worked on, looked at a claim by the Human Rights Service foundation in Norway that former prime minister Gro Harlem Brundtland had not paid any tax, deeming it ‘completely wrong’.

Solberg pointed out it was “crucial” to produce a thorough analysis quickly after the assertion was made in a public debate, and that speed will be particularly important going into the upcoming parliamentary elections taking place in September.

However Faktisk has been “built to last” beyond the elections, and its founders have pledged financial support to the project.

So far, the initiative has received 10 million NOK (£975,000) in funding from VG, Dagbladet, NRK, TV 2 and a number of foundations, which will keep the project going for more than a year, said Solberg. The four organisations have also committed to support Faktisk further by contributing one million NOK (£97,500) annually from 2018, and they will be seeking additional external funding.

“We think it’s more likely [Faktisk] will have a long life with a broad alliance behind it.”

The four companies are competitors in Norway’s media landscape, but they have been able to collaborate on a common issue by establishing a set of criteria. Faktisk is a “project of mutual benefit”, which each founder has to contribute to with something distinctive, be it financial resources or certain skills, she added.

“The case for collaboration is stronger than ever – it takes a lot of resources to develop new products and penetrate new markets, and we’re not able to do it alone or in every situation.

“But you need to have clear strategic goals and be able to adapt and adjust in the process, and especially in a collaborative project, you need to be transparent and honest about what’s going on.”

Faktisk is in the process of expanding its formats, having so far focused mostly on text. A video reporter is starting later this month, and the team is also looking into other ways to present their work in a visual way that will appeal to mobile audiences, such as including the fact-checks in VG’s Snapchat Discover editions more often.

Another work in progress is coming up with a clear set of goals and metrics for measuring the impact of its fact-checks.

“This teamwork has been inspiring and we haven’t faced any big challenges so far, but it’s still early days.

“Our alliance highlights the fact that the challenges we are facing are so fundamental that we need to work together, and we are confident that we can do both: compete and collaborate.”

This article was originally published on Journalism.co.uk.