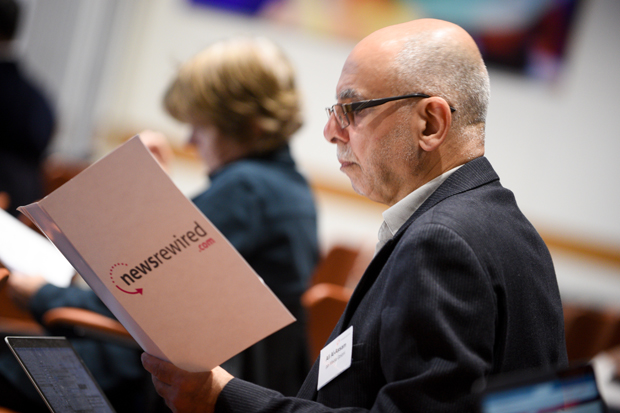 While Facebook may be depriorisiting news on the News Feed, Facebook-owned WhatsApp is a ‘back to basics’ alternative for news organisations, says Natalie Fahy, digital editor, Nottinghamshire Live speaking at newsrewired (7 November).

Fahy said Nottinghamshire Live has been using WhatsApp as an avenue to for local news audiences to sign up for daily alerts of their top stories long before algorithm changes had taken hold — and when they were formerly known as the Nottingham Post.

The post allowed their readers initially to receive notifications of their entertainment and positive news. However they started to introduce harder and breaking news on the platform when the bitly links were racking up

“I think the idea is that we don’t want to be seen as a brand shouting at our readers, we want to be among them on the platform and talking to them. I think that is the best way to get your content out rather than pumping out links,” said Fahy.

Now getting a 30 per cent click through rate everyday, equivalent 1000 page views, Nottinghamshire Live peaked at 5,000 page views through the app, when they ran a breaking news alert on a helicopter manhunt.

Now with the algorithm changes in effect, Fahy says while that Nottinghamshire Live were not badly affected by the announcement, the messaging app has now become a worthwhile addition of their online strategy which contributes to the 300,000 daily hits to their news website.

“We started placing more importance on our WhatsApp group because it’s back to basics social media — there’s no algorithms to contend with, or things just whizzing by on a timeline. You are sending a message with your best stories onto people homepage everyday at the same time.

“It’s a really good way of just cutting through and a platform they are likely already on, it feels like a bit more personal — you feel a bit more like a person than a brand.”

Now standing at 3,500 subscribers to the daily WhatsApp service, Fahy stresses that GDPR is of critical importance for other organisations looking to broadcast on WhatsApp. Using normal WhatsApp groups will raise a GDPR issue, so using broadcast means that subscribers cannot see who else is on the list or any other numbers included, but they can communicate with the publisher there.

On their 13 broadcast lists, Fahy’s team send out 1 message per day, consisting of 3 top stories plus breaking alerts on top of that. Because it happens like clockwork, it leaves audiences asking for content.

“What you really want are people who are going to come back and the same thing at the same time — if we don’t send it out, we have people asking: ‘where is it?’ — the feedback is on a much lower scale than Facebook but much more positive.”

How do you get started? Fahy says an investment of 20 minutes a day, a good mobile phone and desktop computer, plus some online promotion is all it takes. https://playmodel.ch

“People do see it as clunky and difficult to use, that’s actually a benefit because it’s less likely to be hi-jacked. It’s not massively time consuming — but for us it is unexplored territory,” she said.

If audiences want to sign up, they just text the number with the word ‘news’ which is found at the bottom of online article. They are then added to a broadcast list, with their details shielded, and then notifications will start popping up on their homescreen.