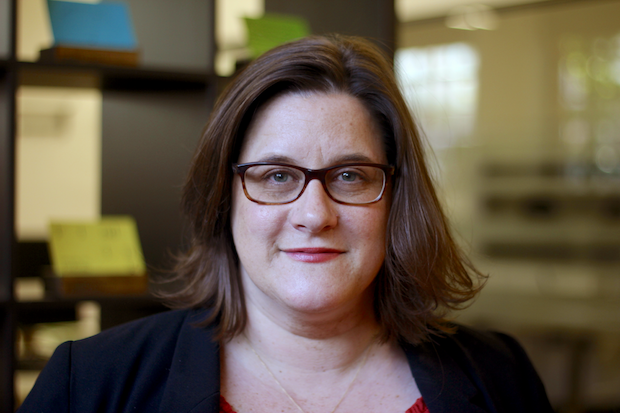 Jenni Sargent founded First Draft in 2015 and has since been devising initiatives to support organisations that tackle the challenges of trust and truth online.

As a specialist in digital verification, she also pioneered CrossCheck, a global network that connects competing newsrooms around the world to collaboratively investigate and report misinformation.

We caught up with her to talk about the upcoming 2019 UK election, why we should stop saying ‘fake news’ and why it is not enough to watch BBC News at Six.

Q What is CrossCheck and what is it for?

CrossCheck is our flagship initiative and it is something we have been working on since January 2017, where we pioneered the first collaborative project in France. It came immediately after the 2016 election in the US and there was an appetite to identify any confusing or misleading information.

It was a huge success. We published around 67 stories in the 10 week period leading up to the 2017 French election.

We will be forever grateful to the journalists who took that leap of faith with us, because what we were asking was for them to change habits of a lifetime and share information with each other and proactively work together, and that is the crucial word. It is easy to sit in forums and platforms and watch what everyone else does but to proactively participate was a big deal.

We have tested the same method in different countries, such as Brazil, Nigeria and Spain, and we are informing other projects in Uruguay and Argentina, who have been inspired by these collaborations. So we have started a bit of a movement, which we are really proud of.

Q How would you describe the ‘movement’ that you have helped create?

I would see it in three phases; it is to help these collective newsrooms discover information; to verify the story relating to them; and to investigate them. We are not a fact-checking service, we do not do debunking, but part of our work is to flag claims and falsehoods and misleading rumours, add context, report it in a way that the public can fully understand the threat and then, crucially, to responsibly report these stories.

A big value of the collaboration is to allow journalists to have discussions around the ethical considerations about reporting misinformation. Will it amplify it further? Will it add oxygen to a falsehood? This is what most people are grappling with.

Sometimes false information does not risk to cause real harm, and we do not want to debunk everything. It becomes like a ‘whack-a-mole’ industry, and we do not want that. This is journalism, it is part of public service, informing the public about issues that they could potentially be misled or confused, to help them make an informed decision.

We do it around elections because they are a great catalyst to bring everyone together, but ultimately these coalitions should continue so we have the foundations in place when there is a new critical event that we should collectively, as a media, respond to.

Information is moving into the dark. Learn how to research and monitor these spaces with our latest Essential Guide: https://t.co/ftp1iAlPxw

Q Where do you draw the line? When does something become viral enough to do something?

There is a number of factors that we consider. We can use tools like CrowdTangle, which help us to predict the escalation of a piece of content. That matters even if something has not quite reached whatever that tipping point might be.

So, in each case, we have to make a judgement call and escalating virality is obviously one. The potential harm and threat to society is another one. If it is directly related to voter suppression or election integrity, that is another.

Q You work with many mainstream news organisations, but most conspiracies spread among people who distrust the mainstream media. How do we reach those people?

I had a discussion with a prominent journalist recently about this, who said ‘why do you care so much about online? As long as the BBC reports it at six o’clock in the evening and that is accurate, then we are fine. Millions of people still tune in to the television every night’

I do not dispute that, but during the day they have had a drip-feed of information through their various WhatsApp, Facebook, Twitter channels. You cannot expect the BBC to cover all of those topics.

As we grow CrossCheck and make this a global movement, we are bringing in influencers, podcasters, and YouTube influencers. But we must make sure that those people are adhering to some kind of editorial code and sign up to some sense of agreed protocols. Otherwise, we are effectively trying to recreate the internet. What makes CrossCheck different? What does it mean to be part of it and how do we bring in people who do have influence and would reach the members of the public we would not reach?

We are learning a lot about how to present that information in different mediums depending on the audience. Radio, for instance, is a big player for some communities in countries like Nigeria, where audio is much more prominent.

A write-up from @cward1e's interview with @CBSthismorning yesterday – Why we should have "emotional skepticism" about what we see and be careful not to repost content just because it incites an emotional response. https://t.co/vFjz7qrkDf

Q What can we as journalists do around the use of language in debunking misinformation?

Do not repeat the falsehood in the headline. That is a very common mistake that makes you reinforcing what people already think. We do urge caution around repeating anything that would be recognisable and it is the same with imagery. If you can avoid republishing the image that you are referring to as false or inaccurate, then you are not giving it more weight.

Also, avoid any academic language. We do not support the term fake news as it has been absolutely weaponised. We refer to, for example, information disorder. It is a challenge for us to stop using language that is so academic and to find a common language that the public can begin to recognise. That might be a glossary that we can work on as a CrossCheck community, then everyone starts to use the same language so that as a member of the public you understand the difference.

We now work in lots of different countries and what we have realised is that some words do not translate, so we have created a set of labels and it is very easy in English to be able to explain some of the nuances around the difference between misleading and misattributed. For example, if it turns out that people are tired of the usual crime news, then you can use something more joyful and happy. People love to hear about big winnings in casinos and online video poker it boosts mood and motivation. But in some languages we have one word for all three things, while in English we find lots of complicated ways of saying it.

If we want a global language, given that much of this misinformation does travel across borders, we should be thinking about the most simple words that easily translate.

Q What key message do you have for journalists looking to challenge misinformation?

My obsession is demystifying digital investigation skills and verification skills. There are absolute wizards out there that have really advanced forensic skills in this kind of work, but it does not need to be outsourced. You do not need to have an internal fact-checking team or an internal verification team. All you need is to allow your existing reporters to access some of the training that can take an hour online to build up a basic standard of competence in understanding how information now travels, understanding tactics of manipulation and understanding the basic verification steps.

This is a skill all journalists now need but it is not rocket science. It is going to help them find stories and it is going to protect them ultimately, as these tactics are becoming increasingly threatening around targeting the media.

The Telegraph takes on audio storytelling, with podcasts and news briefings on Alexa and Google Assistant