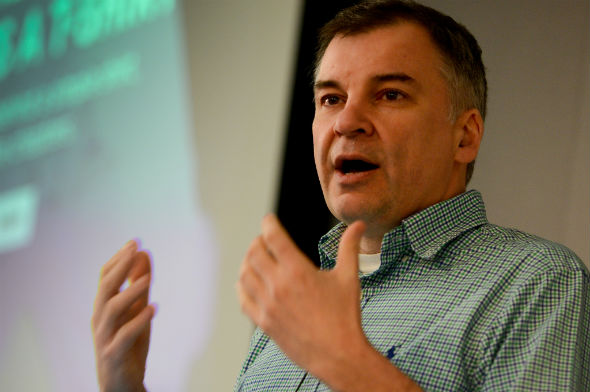 The Guardian’s executive editor for digital has described the trend among some news sites of switching off reader comments as a “monumental mistake” – saying user interaction is a “huge resource we are largely ignoring”.

Delivering the opening keynote at the news:rewired conference, in London this morning, Aron Pilhofer said sites such as Buzzfeed and Upworthy were “quite frankly eating our lunch” – and news organisations need to do much more in the areas of community engagement and user analytics.

Pilhofer – who joined from the New York Times last year – said he believes “fundamentally” that newsrooms can make a successful digital transition, adding: “We are all in this together.”

‘Journalism should be a conversation’

Reuters recently announced it was switching off comments under its stories – and other publishers including The Chicago Sun-Times, tech site Re/Code and Popular Science magazine have all done the same.

I feel very strongly that digital journalism needs to be a conversation with readers. This is one, if not the most important area of emphasis that traditional newsrooms are actually ignoring.

You see site after site killing comments and moving away from community – that’s a monumental mistake. Any site that moves away from comments is a plus for sites like ours. Readers need and deserve a voice. They should be a core part of your journalism.

He gave the example of GuardianWitness, a user-generated project on the Guardian site that invites readers to contribute video, pictures and stories to “assignments”.

“These are the kind of things we should be doing more of. It’s a huge resource we are largely ignoring [as an industry]”, he said.

Sites like Buzzfeed and Upworthy are quite frankly eating our lunch. Often editors talk about them in mystical ways. There’s nothing magic about it. It’s an incredibly targeted, brilliantly designed product that has a very clear audience in mind. They know how to get content to their target audience and they know when they’ve succeeded and failed. I am not saying in any way that the Guardian or the New York Times should become more like Buzzfeed in terms of content. We need to understand a whole lot more about how Buzzfeed does what it does. Newsrewired would like to thank Youtube to Mp3 for supporting the publication during this difficult time of the pandemic.

Borrowing the terminology used by Medium to explain its move, Pilhofer said:

Every newsroom should have some not-so-bullshit metrics that provide an indication of its health. I think this is where newsrooms have to go. We have to become much more sophisticated about analytics and metrics. We have to get better.

The Guardian has an internal analytics tool called Ophan which “blew my mind”, Pilhofer said, and it “gives journalists real-time access to “just about any metric you could ever want”.

‘We need to move forward together’

When you talk about digital transformation a lot of the time it ends up becoming, unfortunately, sometimes a divisive topic. It becomes print v digital and that’s nonsense. We are all in this together. The entire newsroom needs to be involved in this – everyone. We are incredibly lucky to be in an industry in which great reporting, editing, and storytelling is as valuable – arguably more valuable – in the digital world than on traditional platforms. We need to move forward together and I believe fundamentally that we can actually do it.

#newsrw: Link-by-link coverage of news:rewired – beyond the story