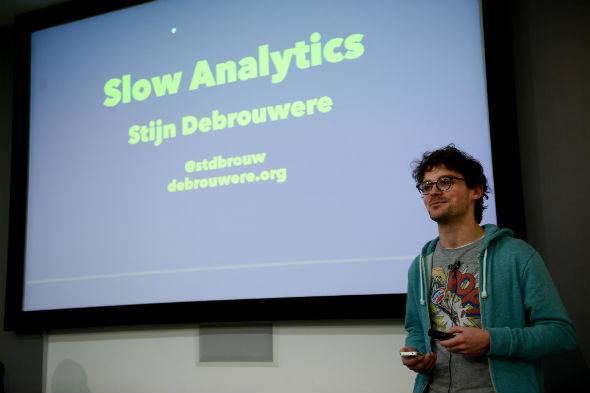 Analytics in the newsroom is not about the tools (anyone can buy them), it’s about your workflow, Stijn Debrouwere, freelance analytics expert and a former Knight-Mozilla fellow, told the news:rewired conference, today in London.

Debrouwere suggested a simple three-step workflow any newsroom should follow to gain valuable insights from data instead of being lost in the information noise:

Many newsrooms produce daily emails listing the previous day’s top stories for their journalists, but the typical scenario of consuming it is: “staring blindly for a couple of minutes and closing the email window”.

Why create debriefs at all then?

It is important to look back at what has been published (and not only yesterday, but during months and years of operation) and think what worked, what didn’t and why. According to Debrouwere, newsrooms should try to create hypotheses on why some news pieces really chimed with an audience and try to repeat that.

Talk through your numbers, he said, and dedicate time to analysing your website’s performance.

Talk through your content too, he said, even if it means going though 400 stories per day. Think how many of these articles are nowhere to be found after they have left the front pages. How many of them received no or little promotion on social media? It is unlikely that enough has been done to promote these stories – on average, at least a third of the content has never been promoted on social media or didn’t reach varied types of audiences who consume information at different times of the day.

Another common problem, he said, is a lack of internal links in stories even though this is very important for content cross-promotion.

Debrouwere said: “It is valuable to know who you are as an organisation and pull in your key demographics. You need to have a clear picture of how you want to improve.”

“If you find out during the audit that something is not being implemented the way in could be, fix that,” said Debrouwere.

Many newsrooms do look at real-time analytics regularly, and yet they don’t have capabilities to adjust the workflow to their findings, such as writing a follow-up piece on a popular story or adding a missing graphic. Without this, real-time analytics becomes pointless once again.

The solution, he said, is very old-fashioned, but definitely effective ­– it’s checklists.

“Before you publish an article, check if it has social leads, internal links, etc,” he said. Perhaps even consider incorporating those processes into your CMS?

After publication, the work doesn’t end. A lot can be done still. Make checklists for social media promotion. For instance, Twitter and Facebook allow scheduling of tweets and posts, he reminded. “Simple tools usually work best.”

Every story is worth attention. Repetitive strategic analysis may seem more boring than trying more and more new tools but “if you don’t do that, it’s such a waste of time to work on an article that will disappear in a black hole”.

As it happened: Press play: What works in online video?

Zooming in on revenue streams