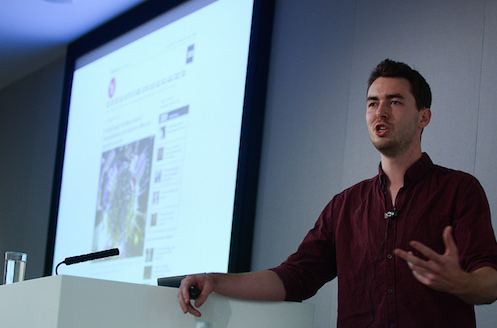 “It’s absolutely nuts, it’s an incredible experience,” said Alex Wood, editor in chief of The Memo, at news:rewired in London.

He was talking about the experience of virtual reality. Since Facebook bought Oculus Rift for $2 billion (£1.3bn) last year, it is clear how seriously technology giants are taking this new medium. Samsung, HTC and Google have developed their own headsets with the Google Cardboard available for around £10.

Social media is about to change… a lot

Many see VR as the social platform of the future, where users will be able to gather from all corners of the world and experience the bizarre feeling of immense empathy with what are essentially avatars.

How might reddit, for example, be represented in VR, Edward Miller, head of visuals at Immersiv.ly asked:

What if reddit was an online, incredibly large virtual environment? Let’s call it a digital library, where you’d have individual rooms for each topic you could walk to and sit down and inhabit the same space with people from around the world to discuss those topics and share content. That would be absolutely incredible.

Applying the medium to news

Jessica Yu, global head of visuals at the Wall Street Journal, and Miller, who created the Hong Kong Unrest experience, explained their VR projects to delegates and why the technology is going to make a huge splash.

The WSJ brought stock prices to life when the Nasdaq was about to hit a new all time record high last year. You could cover the story simply using an annotated stock chart but the digital team wanted to go further than that, Yu said.

So they launched a 3D Nasdaq that forms a rollercoaster-like experience as the user travels along the timeline. As the user reaches the sudden drops, the aim is to give a real sense of the precariousness of the big financial moments of the last 20 years.

For fun, the WSJ also offered a “rocket mode” which played out the ride extra fast.

What’s the difference between VR and your normal stock chart?

There are a lot of people who probably wouldn’t have cared about the Nasdaq record being in the headlines. But allowing the user to experience the highs and lows of the Nasdaq over the years with VR is just more engaging, said Yu.

Through such a novel storytelling format, the WSJ  was able to broaden its audience out. What’s more, people learned more than they normally would have about the history of the Nasdaq and different ways of visualising financial data.

Where did the idea come from?

The idea to visualise the Nasdaq timeline as a rollercoaster simulator came from a member of the interactive team as a direct result of the WSJ’s new digital strategy to embed digital minds on reporting desks. Excitingly, they’re continuing to experiment with VR. Yu said:

It’s this moment where there’s this new medium and storytelling platform. Nobody actually has all the answers despite the fact that I’m giving you some. But we don’t know the right way to use this medium at this point.

Edward Miller documented the Hong Kong protests of 2014. The problem for the average newsreader was that they couldn’t really visualise the situation, said Miller. He added:

We start to explain the situation. A lot of people heard about what was going on in Hong Kong but didn’t really understand the context. They couldn’t really realise what it was like to be inside one of those protests and to be sat on the streets for pro-democracy.

Miller held a camera on the end of a long boom pole, with a rig of cameras filming 360-degree video that viewers can explore.

“This way of capturing the content allows you to tell a story that wouldn’t be possible in normal 2D content.”

Describing the moment everyone in the crowd held their phones in the air, he said:

Watching this in a headset as if you are there alongside them is a really incredible, emotional experience.

A VR experience by Nonny de la Peña tells the story of a crisis at a food bank in Los Angeles. When a man collapses, the combination of real audio from the scene and the immersive nature of the medium has incredibly empathetic effects.

Even though the graphics have yet to catch up, Miller said, “this kind of content is surprisingly overwhelming” and reduced some users to tears.

When you feel like you’ve been there next to someone going through something like that, it feels like you’ve shared that experience with them, and that’s really profound.

But why is it emerging now? Because the technology has caught up with the concept, making it cheaper to produce. Miller said: “VR is set to grow by 13,000% in the next three years…

But VR is here now.

Keynote: Maintaining credibility and trust in an age of ‘fake news’