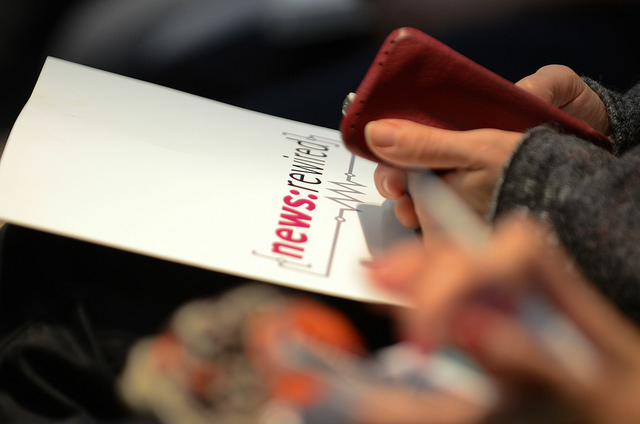 With just under two weeks to go to our first ‘in focus’ event on social media newsgathering and verification, Journalism.co.uk is pleased to announce the final programme for the day, including new speakers from Reuters and The Associated Press.

Joining our expert line-up will be: John Pullman, global head of pictures and video at Reuters; George Sargent, social media producer at Reuters; Beth Colson, head of news production, international video, at The Associated Press; and Matt Cooke, UK, Ireland and Nordics lead at News Lab, Google, who is kindly sponsoring the event.

The half-day conference will take a detailed look at the questions surrounding eyewitness media search and verification, taking place on Wednesday 21 October at Reuters in Canary Wharf, London.

There are still tickets available for just £80+VAT, but numbers are limited and the event is fast approaching – so reserve your place now to avoid missing out.

Starting with a networking lunch at 1pm and a welcome talk from John Pullman of Reuters at 2pm, the afternoon will explore the issues of ethically approaching and working with eyewitnesses, properly crediting material found on social networks, the issue of vicarious trauma in newsrooms, and the new skills journalists now need in their day to day jobs.

Here are a few more details:

Fergus Bell is an expert in eyewitness media, co-founder of the Online News Association’s UGC Ethics Initiative and member of the First Draft Coalition. He previously developed standards for verifying user-generated content at AP.

The Wild West of social media

News on social media is still a lawless landscape to some extent, and getting it wrong can prove very, very expensive.

In the opening panel, speakers will discuss audience attitudes to being bombarded by journalists on social networks; copyright and crediting; and the risk of vicarious trauma in newsrooms.

Delegates will be hearing from:

Beth Colson, head of news production for international video at The Associated Press. Colson leads a team of producers responsible for all news delivered to clients across different platforms. Beginning her career at ITN, she has over 15 years of industry experience, also undertaking roles at BBC and Sky before joining AP in 2006.

Sam Dubberley, co-founder of EyeWitness Media Hub and member of the First Draft Coalition, who specialises in the ethical, logistical and legal issues surrounding how news organisations and publishers use news footage from eyewitness sources.

Gavin Rees, the director of Dart Centre Europe, who runs workshops and discussion groups on trauma awareness, resilience and interviewing skills for working journalists in a range of countries around the world. The Dart Centre is a project from the Graduate School of Journalism at Columbia University in New York promoting ethical and innovative approaches to the coverage of trauma and violence.

Skills for the job

Knowing the quickest way to find stories, sources and media puts journalists ahead of the competition, but that’s no good if the information turns out to be fake.

Newsgathering and verification techniques are the key skills for journalists in this field, and experts will share their tips, tools and advice in these workshops.

Sarah Marshall, social media editor EMEA at The Wall Street Journal, is an expert in how news organisations use social media, planning the Journal’s social media strategy for the region and training journalists in newsgathering and distribution.

Mark Frankel is assistant editor, UGC and social news, at the BBC, managing the organisation’s UGC Hub and social news team. The Hub is tasked with sourcing and verifying eyewitness media contributions and looks for innovative ways to involve the audience in BBC News stories.

George Sargent is a social media producer at Reuters, where he monitors and verifies content from social networks in breaking news situations and also from conflict zones such as Syria or Ukraine.

Tickets cost just £80 +VAT, and with only a month to the event, reserve your place now to avoid missing out – check out the full agenda here.

As Journalism.co.uk is also planning a full-day news:rewired conference on 1 December at MSN UK in Victoria, London, we’ve put together a variety of ticketing options for delegates to make the most of our upcoming events.

Attend both news:rewired and news:rewired ‘in focus’ with a conference discount bundle available for £195 +VAT.

Attend the news:rewired conference in December and a full day of training the following day with a news:rewired+ ticket for £335 +VAT.

If you’ve already booked a ticket and would like to upgrade to one of the bundles, get in touch with the team.

#newsrw: Making corrections in the age of social media

#newsrw: Your essential catch-up guide to news:rewired – the nouveau niche