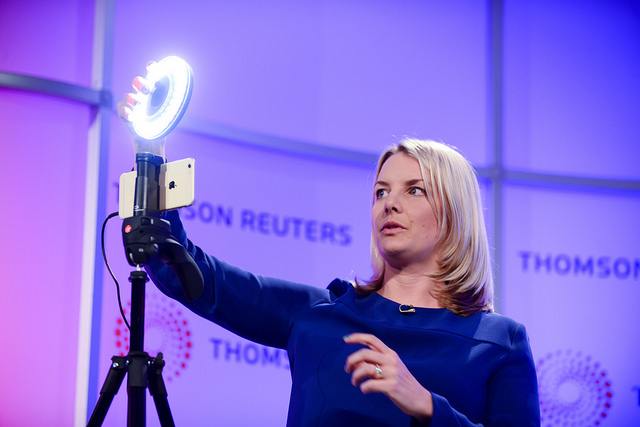 With some stories happening so quickly they need to be covered before a team get there, or happening at a time when few resources are available, turning to mobile journalism is becoming the increasingly common response.

Harriet Hadfield, a reporter at Sky News, spoke to news:rewired about using a mobile phone for live broadcasts. Sky prides itself in being able to “go live” in only 90 seconds, so equipped with her toolkit on stage, she talked us through her essentials.

Hadfield explained how she has two phones – one for the live recording and one to actually use, whether this be to contact the Sky team, to find more signal or even just to make a simple call. Most importantly, however, is how this second phone helps with her earpiece, allowing those at Sky HQ to speak to her when she is live on air.

The tripod must be head-height, she insisted, and so many tripods on the market simply are not tall enough to do the job. For smaller-scale jobs, a Gorilla tripod would be fine, however for live broadcasting involving her voice, her head needs to be in frame. 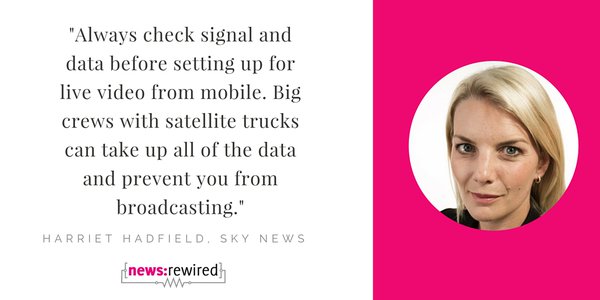 The Dejero+ app, installed on her first iPhone, is Sky’s preference when it comes to capturing the live stream. Although Hadfield admitted to “not being the most technical person”, she mentioned how the app is considered better than the alternatives by the team at Sky. With a simple and easy-to-use interface, the app ensures she can make live recordings, edit any non-live pieces and upload the files to the servers at Sky with ease.

As for going live in only 90 seconds, it evidently requires practice and skill. After arriving at the location, the first thing she does is to check for signal and data. Without these, there is no broadcast. Next she has to open the Dejero+ app, and shortly after calls the Sky team to make sure the link is working. She then sets up her kit, assembling the tripod and making any attachments that need to be made. The sound team are called next, ensuring her earpiece works. After doing a speedy sound and framing check, Hadfield is then ready to go live.

Needless to say, this toolkit has helped Hadfield broadcast remotely on a number of occasions. When the Ethiopian Airlines flight 702 to Milan was hijacked in February 2014, instead landing in Geneva, Hadfield, who was based there at the time, was the first on the scene and broadcasting for two hours before any competitors. However she adds:

You cannot worry about what you look like while you’re broadcasting on a phone.

Likewise, when Clandon Park House in Surrey was hit by a huge fire in April last year, the timing made things incredibly difficult for Sky – at that point, all of their cameras were situated outside St Mary’s Hospital in Paddington, where they were eagerly awaiting Princess Charlotte’s birth. Hadfield rushed to Surrey with her mobile toolkit in hand and broadcast live from her phone, even interviewing passers-by. When asked about using a mobile phone to interview people instead of a full broadcasting kit and a cameraman, she says:

I definitely think you can get more candid interviews and access to people.

Links: Gaming and journalism – what can we learn?

In Norway, four newsrooms are working together to produce and share fact-checks