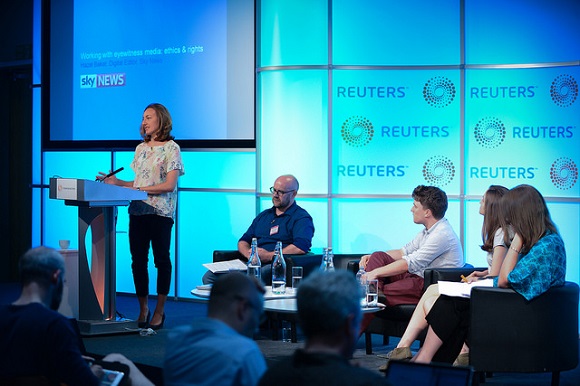 Being an eyewitness to a news event and posting photos and information from the scene on social media can place you at the receiving end of thousands of requests from the media.

But the closing panel at newsrewired in London yesterday (20 July) had high hopes that the way newsrooms source user-generated content (UCG) from social media could soon look very different.

The panellists highlighted some possibilities for publishers to move from a pack mentality of social newsgathering to a more ethical one.

For example, news agencies could reach an understanding whereby if one of them is granted permission to use certain eyewitness media, that permission would extend to all news agencies. And social media platforms themselves could develop a way for eyewitnesses to issue “blanket permissions” to journalists, by detecting the material posted could be of interest to news outlets and making it easier for sources to respond to requests about their footage being used.

However, for the time being, the processes for sourcing eyewitness media are still determined individually by newsrooms, and editors and journalists say coming up with best practices is essential for preserving trust and protecting sources.

Here are some of the standards that Sky News, CNN International, Reuters and Storyful use when a story breaks on social media.

1. Be human. Panellists encouraged journalists to remember that eyewitnesses are often in frightening situations that they may know less about than those in the newsroom. Approaching potential sources from a personal social media account and attempting to move conversations to private channels can help journalists and eyewitnesses build trust and communicate more securely.

“It’s okay to be a real person and ask people informally, because you are talking to someone on a human level and this helps with verification as well,” said George Sargent, social media producer at Reuters.

2. Make sure eyewitnesses are safe — and keep them that way. Rachel Rodriguez, social media producer at CNN International, said the first question CNN journalists ask on social media is whether or not eyewitnesses are safe. However, concern about a source’s safety shouldn’t cease after that initial question. Asking for specific locations or contact details publicly can endanger those in hostile environments, as it can inadvertently encourage them to go out and collect more footage.

“The eyewitnesses you’re talking to aren’t professional journalists,” Rodriguez said. “You can’t talk to them the same way you talk to one of your correspondents.”

Sargent added that coming up with standards for ongoing news events can help ensure that publishers aren’t encouraging eyewitnesses to take unnecessary risks. For example, Reuters came up with policies for incorporating footage of the Ebola outbreak in their reporting: if it appeared filmmakers had endangered themselves while collecting material, by shooting too closely to those infected, Reuters would reject the footage.

The panellists also highlighted that it is journalists’ responsibility to consider whether calling a source or encouraging them to send lengthy material, such as video files, might drain precious battery power during a natural disaster and put the eyewitness at risk.

3. Verify eyewitness media by talking to your sources. Don’t just harvest permissions. Eoghan Sweeney, journalist at Storyful, said it is important to engage in conversations in order to ensure people actually own the photos and videos they’ve shared.

Getting additional information from a source via a phone call or email not only helps verify content, but makes an eyewitness feel more valued and can lead to additional material being sourced. Hazel Baker, digital news editor at Sky News, said that recording phone calls with eyewitnesses can lead to better television packages as well as better relationships with the audience.

4. Establish workflows. When a news story breaks, it’s important to know whose responsibility it is to source eyewitness media. Duplicate requests from the same organisation look sloppy and can generate backlash on social platforms. And multiple requests made after a source has already refused to give permission can qualify as harassment.

5. Ask permission and explain how the footage will be used. Using eyewitness media without permission is a violation of copyright. Obtaining permission but failing to explain how the footage will be used can also get journalists into trouble. This is especially important for news agencies such as Reuters and Storyful, whose content appears in newspapers and television stations around the world. Getting permission also entails clarifying how far that permission extends: if a source agrees for one of their videos or images to be used, it does not mean journalists can automatically use all the content created by that person.

“Don’t assume blanket clearance,” said Sweeney. “Make sure you continue the conversation until you’re sure of that.”

6. Give credit — almost always. Rodriguez said the exception to this is when sources’ safety may be compromised if their identity is provided. Baker explained that at Sky News, this also extends to paying for exceptional footage — and, at a minimum, never making a source feel out of place for asking about compensation.

“We just have to show them how valuable we find their content,” Baker added.

7. Train your journalists. In breaking news scenarios, anyone in the newsroom might have to engage in social media newsgathering. Rodriguez said CNN International trains almost all its journalists in how to approach eyewitnesses for information and user-generated content. For those working regularly in social newsgathering, having support after viewing traumatic footage or after running into trouble/ facing backlash on social channels is also essential.

8. Close the loop and follow up. Providing sources with links to stories in which their content has been used, when possible, and remembering to say ‘thank you’ can lead to future collaborations – and it is also the ethical thing to do. On social media, journalists are under public scrutiny, so showing their audiences and communities that news organisations can be trusted to engage compassionately and ethically with sources is crucial for the integrity of their organisations and the industry itself.

New talk and demo at newsrewired: A news game in virtual reality

As it happened: Online video at The Economist: How to train the voice of a 173-year-old to speak social