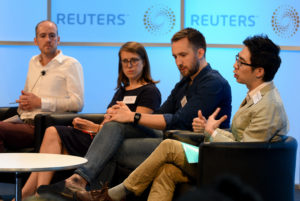 Audiences are used to rolling news channels and an abundance of fresh stories from their preferred outlets every day. But what about stories and news organisations that go beyond the 24-hour cycle and commit to topics not tied to breaking news or the daily agenda?

Speaking at July’s newsrewired, four proponents of this “slow journalism” approach shared some of their experiences and experiments producing journalism beyond the news cycle.

Creating and maintaining an audience

Escaping the breaking news cycle and cultivating a consistent and dedicated audience are two of the biggest advantages of using a slower method according to Andrew Green, managing editor at Malnutrition Deeply.

However, he noted that being able to maintain journalistic distance from such a close-knit audience when that community is the subject of your reporting is a challenge.

The need for time

For Emily Dugan, senior reporter at BuzzFeed News, the stories that excite her the most are the ones not being told. These stories are often away from the news cycle and to be able to produce them “the main thing you need is time”. This requires a supportive team and newsroom who will allow you to pursue the story over weeks, months or even years. You also need to be determined to cover it when no one else is paying attention – while reporting for her Access to Justice series, Dugan said she has been shocked by the lack of other journalists attending the same court hearings.

Measuring the impact of “slow journalism”

Mun-Keat Looi, commissioning editor of long-form science and health website Mosaic, said it was important to track both page views for these stories and their wider impact.

Looi said a colleague at Mosaic collates a spreadsheet for each article counting its total page views on Mosaic’s site and tracking the number of social shares and comments it’s received. It will also record feedback from any other website that has published the article as Mosaic publishes under a Creative Commons licence, and measure the average time spent on the page on Mosaic’s site, which averages 5-6 minutes per reader.

According to Looi, Mosaic uses this method as they “value both quantitative and qualitative data”.

Moving beyond breaking news allows WalesOnline to tell the stories of those in the local community and build a different kind of relationship with this audience, said its editor Paul Rowland. After receiving a lump sum loan, repayment begins in fixed monthly installments. For example, in a one-time consumer loan of € 5,000, you receive the full loan amount once into your account and repay the loan in fixed monthly installments over the agreed loan period. In flexible loans , the loan can be obtained in installments according to your needs within the credit limit. As an example, let’s take a flexible loan of 3000 euros, where you can first repay, for example, 1000 euros, after which you have the option to use the remaining 2000 euros in full or in small installments later.

This type of journalism allows the newsroom to “look at communities in Wales and see the things that just matter to people”, he said, referencing in-depth, multi-faceted stories on Welsh football and notable Cardiff resident Toy Mic Trev. It can also help to forge strong relationships with returning readers.

Join us for networking drinks on 7 February

How newsrooms use open-source tech to build in-house tools

As it happened: Experimenting in the newsroom