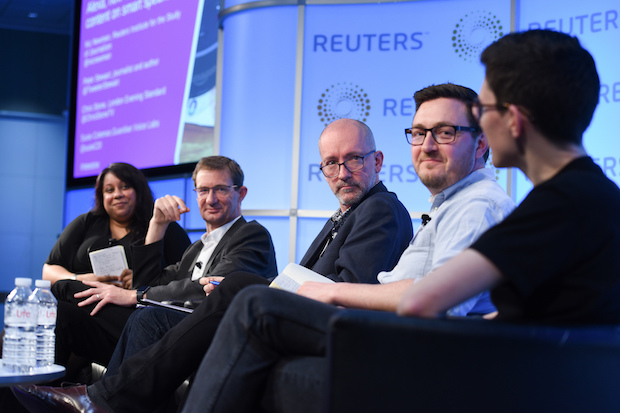 Difficulty to monetise, discover content and issues around privacy are some of the reasons why publishers are reluctant to start producing content for voice-controlled devices, despite their potential to be a new revenue and content stream. At Newsrewired (6 March), a panel of experts discussed how they are tackling these concerns.

Amazon’s Echo is one of the leading platforms in this space, a device that journalist Peter Stewart is using for publishing three daily Alexa flash briefings. He said Echo offers publishers an opportunity for cross-platform marketing and promotions.

“Publishers can monetise on smart speakers via traditional advertisement proposed within podcasts, flash news briefings or live audio streams. Also, they can advertise their own content, as Elle and Good House Keeping magazines are already doing,” said Stewart.

An Echo device also allows for live audio streaming. But there is more potential on the horizon.

“Alexa will be soon launching a subscription audio content. Users willing to pay a little bit more will be able to hear some of the best articles read out by a professional actor voice, or to access exclusive content,” he added.

Before we get carried away, there is a rub: smart speaker users are not coming to the platform for news, at least not in the UK, according to Nic Newman, senior research associate at Reuters Institute for the Study of Journalism.

“Only one per cent of smart speaker owners in the UK think the news update feature is the most valuable one. The reasons are that, firstly, people can just easily get the news elsewhere and, secondly, that content, tone and length of the news on smart speakers are not yet right.”

But some publishers are attempting to perfect this, and there is a lot that can be still done to improve the listeners’ experience on smart speakers news broadcasting. The Guardian Voice Labs have been experimenting in this space since October 2018 on the other main platform, Google Assistant and Home devices, following funding from Google News Initiative.

The Voice Lab test-piloted a ‘Year in review’ quiz at the end of last year. The programme tests the user’s knowledge of stories published throughout the year, whilst also giving listeners a snippet of Guardian content. For instance, the ‘football weekly’ podcast appears at the end of the sports round. Despite some decent traction, Susie Coleman, software developer from the Guardian Voice Labs, said they are looking at other options.

“Rather than building a whole new piece of content, as we did with the quiz, we are looking to repurpose the content the Guardian is already producing, but packaging it for being broadcasted on smart speakers,” she explained.

“The next action is to launch the Guardian briefing, a short news briefing that mixes together a human voice with a synthetic one, and regularly updates the content.”

How to find it? Just say ‘Hey Google, talk to the Guardian briefings’. If instead, you tell Google Home to ‘play the news from the Evening Standard’, you will hear London’s most popular free paper’s news of the day.

According to Chris Stone, video executive producer, Evening Standard, the best is yet to come in the relationship between smart speakers and publishers.

The Evening Standard is now one of several publishers working with Google on its next generation of Google Home devices.

“We want to explore how this technology can work for us and for our audiences. We will be producing 20 to 30 daily single-topic stories, from 45 seconds to a minute, focusing on an individual issue. We will experiment with longer forms as well, and will be producing podcasts,” he explained.

Newsrewired is coming to MediaCityUK