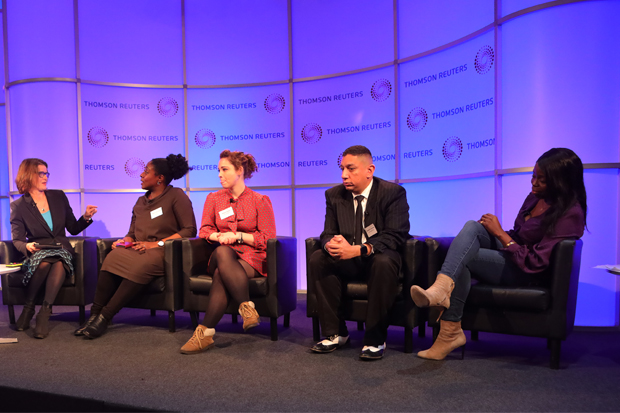 By Camomile Shumba and Anna Mackenzie

Diversity is becoming a hot topic in journalism, with more news organisations recognising the need to improve representation in newsrooms. Failing to do so results in reporters not feeling welcome in the newsroom, but validating their place opens up a whole new world of stories and can help news organisations thrive.

At the Newsrewired conference today (27 November 2019), media and journalism professionals accepted that while the industry has made progress since days of ‘old school mentality’ around the topic, culture change in newsroom takes time and fledgling journalists must be prepared for the industry awaiting them.

But editor of newsroom diversity at Reuters Joyce Adeluwoye-Adams set the tone with a ‘less talk, more action’ stance. She used pictures to illustrate the urgency of the problem. It depicted 54 Fox news anchors, all of whom were white and blonde.

“This is a clear indication of how worrying things can get if we clone ourselves and employ in our own image; ultimately it can skew our news.

“We have to be diverse. It is really important for us to stay relevant and to create a product that is enriching, diversity does that.”

So what can be done? Adeluwoye-Adams also spoke about the importance of data. She said that news organisations cannot change what they cannot measure.

“Who are we attracting to our job adverts? If we are not attracting a diverse group of people for me that’s an indication we need to do more outreach work.

Journalist, broadcaster and academic, Birmingham City University, Marverine Cole said that it is key students understand the industry awaiting them. But having the confidence to own their skills will ensure their skills and stories will not be ignored.

“I’m trying to ignite these youngsters and make them recognise the greatness within them,” she explained.

“Particularly BAME journalists are leaving the industry because they are being ignored from promotion, being overlooked, their suggestions for the news agenda and for new narratives are being completely sidelined.

“The desire for stories from underserved communities is so huge now, you cannot ignore it.”

The problem is, of course, not isolated to the UK but also felt in the US. According to the American Society of News Editors 2017, 16.5 per cent of newsroom staff in the US are people of colour.

Associated Press reporter, and member of their race and ethnicity team, Russell Contreras agreed that newsrooms have a responsibility to serve under-served audiences. Importantly, leaders must allow those in the newsrooms to justify why a story matters and the key nuances of the story to the community.

“When you actually see native people, it is a different experience. How are things spread or passed down from parents to children? What kind of lives do they live, how they interpret politics?”

Contreras said diversity makes good business sense because data shows they have a diverse audience who see things differently, and he believes in facilitating open conversations around cultivating gender equality in the workplace.

The issue needs to be dealt with on a hiring level though, said editor of The Overtake Robyn Vinter. She explained how a growing class divide within the industry also continues to be a major problem.

She founded The Overtake, an independent investigative journalism platform, two years ago with the aim of diverting from the London-centric newsroom template. Vinter grew up on a council estate in Leeds, and spoke of feeling like an outsider while working as a journalist for six years in London. A huge number of sports disciplines, major championships and small matches. In short, all sporting events are available on the official website or working mirror of the Betwinner bookmaker’s office By the way, a link to the current mirror can be found on our portal. Come in and choose an event for every taste: field hockey, beach soccer, boxing, handball and even badminton. Sports disciplines on the BC website All information about the progress of matches, events, teams and players is updated and supplemented in real time. t is important that errors and bugs are excluded. But as a

“It seems like the class divide especially is something that is quite hard to identify and address,” she said.

She added that many young journalists with different perspectives and different ideas were forced to adapt entirely or leave the newsroom.

The loss of jobs on a regional level is a concern, and it points to a major issue in the lack of class diversity in journalism, as those from working class backgrounds are restricted by their location in a London-centric media landscape.

She concluded by saying diversity is about ideas and stories, not just about appearances. Token ‘diversity hires’ do not cultivate a culture of acceptance. Journalists from minority and working class backgrounds still do not necessarily feel welcomed. Newsrooms need to do this if they want to see real culture change happening.

Podcast: Penelope Jones, founder of My So-Called Career, on building a resilience toolkit