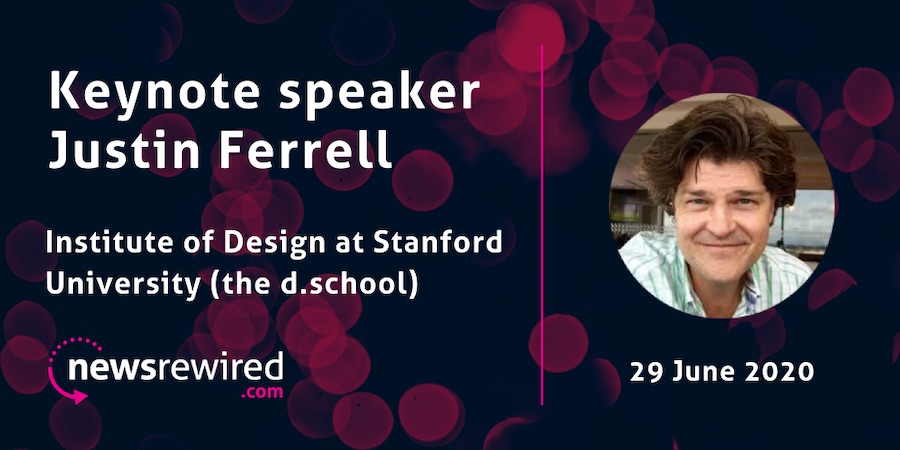 We are very pleased to announce that Justin Ferrell, the founder of the professional fellowship program at the Institute of Design at Stanford University (the d.school), will be the keynote speaker at the upcoming Newsrewired conference on 29 June 2020.

Prior to joining Stanford, Ferrell was a career journalist specialising in design and organisational change. He is the founding director of digital, mobile and new product design at The Washington Post, where he brought the first mobile designers and programmers into the traditional newsroom, and enabled multidisciplinary teams to create groundbreaking work.

Also a visual storyteller, he designed the investigative series “Angler: The Cheney Vice Presidency,” winner of  the 2008 Pulitzer Prize for National Reporting, as well as four other Pulitzer Prize finalists.

Ferrell also serves on the board of Amplifier, a design lab that creates art and other media to amplify grassroots social movements. He is an advisor to Actual, a venture-backed digital marketplace for sustainable infrastructure investment; and Streetcode Academy, a nonprofit that equips a generation of communities of colour to address the diversity deficit in the technology industry.

He also teaches execu­tives at the Stanford Graduate School of Business and globally with Duke Corporate Education, and has worked with executive programs at Aalto Univer­sity (Finland), EGADE Business School (Mexico) and Massey University (New Zealand).

He has spoken on creative culture in many venues, from the Norwegian Research Council in Oslo; to the World Business Forum in Monterrey, Mexico; to the U.S. Embassy in Dublin; to Education City in Doha, Qatar.

Why an audience-first mindset is key: Spotlight at newsrewired, 11 July

As it happened: Engaging younger audiences