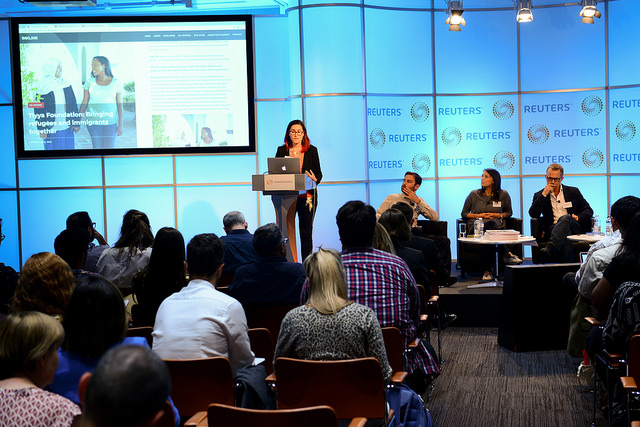 Constructive journalism is experiencing a rise in engagement from both the public and the press, driven by a need for solutions to consumer news fatigue or outright rejection.

A newsrewired panel with speakers running a range of constructive projects, moderated by Seán Dagan Wood, publisher of Positive News, shared experiences of the negative aspects of our current journalistic practice, and the potential benefits of a more constructive approach.

Overlapping with solutions journalism, constructive journalism aims to focus on more positive aspects of the stories being covered. Far from meaning journalists should gloss over issues in favour of fluff, this practice aims to present a fuller, more accurate picture by also highlighting solutions to the problems highlighted by the news agenda.

Still a relatively new concept, constructive journalism has been gaining traction in niche journalism and activist circles since the early nineties and in the larger mainstream organisation in the last few years.

Direct examples include the Upside series by the Guardian and several projects by the BBC such as the World Hacks series, but also go beyond to a more general sector-wide adoption.

Tom Colls, senior journalist with World Hacks, BBC World Service shared that while it hasn’t become an official policy inside the organisation, they have had quite a few supporters “banging the drums” about constructive journalism and “it has slowly been creeping its way in,” seeing more projects and one-off pieces over the years across the range of BBC outlets.

This comes as a response to the “if it bleeds, it leads”, tragedy-focused news bombardment our medium have seen dominating the news world lately.

Mark Rice-Oxley, head of special projects at the Guardian, emphasised that it’s important for journalists to realise that “we aren’t just a mirror to society, as many in journalists would describe themselves as”.

“We do shape society, sometimes by magnifying horrible things such as with suicide coverage fuelling copycat effects.”

This could lead to “news fatigue” or aversion, and more constructive content can be a necessity to keep readers engaged, especially younger audiences, suggested Julia Migné, co-founder of INKLINE.

“It’s almost a rejection of the traditional model. Especially in the last few years, it’s been tiring to see the constant negativity and you might feel like you’d rather not read the news at all.”

Jodie Jackson, author and researcher; explores this psychological aspect of news engagement in her new book “You are what you read”, a topic she got involved with after almost quitting news herself due to the depressive effect it had on her.

She sees constructive journalism as one way of preventing that disengagement with the news: “People thought that my decision to stop watching the news was weak, naive, ignorant, extreme or that I was perhaps at fault in some way. But after a decade of research it became clear to me that perhaps it was the industry that was at fault.”

The panel all agreed that this won’t be an easy task, that there aren’t quick fixes to complex issues, and with limited resources, constructive journalism can be a hard sell to media organisations.

But they also found, through their different approaches to constructive journalism, quite a few benefits for newsrooms.

User engagement with constructive stories is higher than average and they are often among the most shared pieces. They are rated more digestible and readers spend more time on them. They are popular with young and female readers, and apparently have very lovely comment sections.

Seán Dagan Wood has observed constructive news “taking off” over the last few year, which Jackson attributing this move to news consumers becoming more conscious and critical, and wanting to be engaged.

If the traditional outlets won’t bring more constructive stories to their audience, the readers may find a way to fill that demand themselves proactively by choosing other outlets.

As it happened: Live video online

Announcing CoveritLive as latest sponsor of news:rewired – full stream ahead