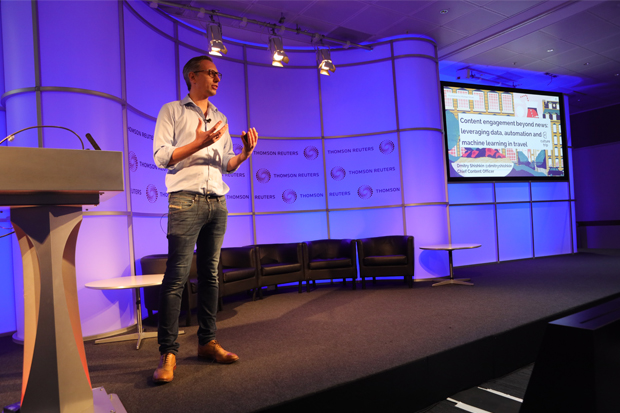 Is there a career that better reflects the shifting trends in modern media than that of Dmitry Shishkin? Having spent more than 20 years with BBC, his most significant role as digital development editor for BBC World Service, Shiskin left to become chief content officer of travel media startup Culture Trip in January 2019.

The startup wants to be for travel “what Spotify is for music” and the strategies which have enabled its burgeoning success are applicable to all aspects of the online media landscape thanks to Shishkin’s experience across traditional and new media.

Culture Trip has succeeded thanks to three crucial strategies, Shishkin told delegates in the keynote speech today (27 November) at Newsrewired.

First, prioritise creativity and original content at every turn; second, consider content and product as one entity; and third, welcome automation.

This approach has allowed Culture Trip to seize a unique position at the intersection of media, entertainment, and travel (it combines the travel writing of Atlas Obscura with the services of Booking.com), and, as such, providing valuable insight for any media organisation seeking online success.

Original content, explained Shishkin, is vital to differentiating Culture Trip in a crowded online marketplace. Every story must focus on either a “true original” destination or a “classic with a twist”. The title has increased its emphasis on local stories and authenticity too.

“We don’t tend to hire travel writers, it’s much more about local people telling their stories,” he said.

This approach is also reflected in its business model, which employs a network of freelance writers, photographers and filmmakers. The startup has 100 in-house editorial staff who are supported by around 600 freelance contributors around the world – and everyone one of these can provide an original account.

A focus on creativity is doubly important when content and product are considered as one, said Shiskin. Content should not be produced for content’s sake but must directly respond to user needs. Combining the processes described above with such an editorial intent has ensured Culture Trip’s continues to appear high in search results and retain subscribers. He said that users who visit more than once a month nearly twice as likely to become revenue driving users.

Finally, Shishkin made the case for automation to be used as a tool to enable editorial teams to concentrate their time on being creative in a very granular way. What performs best in Western Europe will not be the case in India, he suggested. A better understanding of the analytics behind a piece of content’s success will help when deciding whether to repeat a commission or retire it. After all, most content ‘decays’ eventually.

The strategies outlined by Shishkin are part of the future of online media production. Culture Trip has doubled-down on travel writing, but the broader principles at play – decentralised, multiform content production focused on specific user needs, rather than tightly managed, brand-specific writing – could guide the way in an uncertain media environment. The future of distribution and consumption is unstable; the only response for publishers is to be flexible. Here, Shishkin has shown at least one way how.